Pro Tools is Better Than You Think!!! 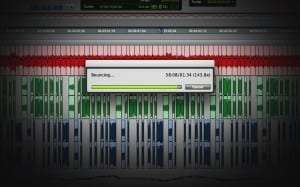 With the release of Pro Tools 11, Avid is proudly touting their FTRT (Faster Than Real Time) bouncing as one of the crowning features to this upgrade.  This is causing quite a bit of heckling in the Audio Industry especially from other Digital Audio Workstation (DAW) users.  I mean, didn’t FTRT bouncing basically exist in all other DAW’s since 1995? (don’t quote me on that, just a rough overly exaggerated estimate)

Why Pro Tools Caught My Attention

Okay, I’ll speak as the Pro Tools Fanboy. 🙂 Bear with me and be offended other DAW users! 😉

When I was originally considering Pro Tools (2005), I initially HATED it! No FTRT bouncing, Freezing, MIDI was a mess, interface was ugly, workflow felt clunky etc. etc. etc. What eventually turned me back to Pro Tools was when I got to use Pro Tools HD in a high class studio.  What blew me away was when I realized that Pro Tools HD systems allowed you to record and monitor through the computer with multiple plug-in processing engaged with NO apparent latency.

Up to that point of my career, I had worked primarily on native systems which quickly bogged down the highest performance computers adding loads of latency.  Therefore many of us engineers could only use our recording software to capture and playback the music, but certainly not to perform through, and certainly not with multiple plug-ins engaged.

The benefits of having a system that allows you to record through the computer with plug-ins engaged is HUGE!  This means that you can actually be using your EQ’s and compressors non-destructively while recording.  This, of course, saves loads of time within tight budgets of today’s music industry and also allows performers to sound their best while recording.  I firmly believe that when a performer sounds great, they perform great.

Why not just use analog gear?  Well, beyond the fact that analog gear is so expensive, there are other advantages.  If you realize half way through your recording that you actually do want your snare drum to be brighter, you can make that adjustment on the plug-in and it is as if the adjustment was made from the beginning.  If you mess with settings like this with your outboard gear, you can create a nightmare for your mixing later.

Back to my points.  This was clearly a huge advantage over any other DAW! – Let me clarify, no other DAW will let you build a HUGE session that is seriously taxing the CPU and let you then track with 6 realtime plug-ins, sends all enabled with no noticeable latency. Pro Tools HD has been doing this for like 15 years and has been able to do this because of it’s hardware integration with it’s software.  Other DAW’s native processing is kind of almost finally reaching these kind of advantages.  For an advantage like that, it cost Pro Tools the ability to print FTRT for many many years (according to Avid). Well, I personally would take this advantage over FTRT bouncing any day!

In fact, in many many cases, FTRT is slower (you are hearing me right), than bussing your tracks to an audio track in Pro Tools and just punching in the mix change and then exporting the newly consolidated stereo mix. I’m telling you, this workflow is the way to go and will be the same for me even when I have PT 11. I will definitely still use FTRT bouncing for exporting stems and bouncing long books on CD and etc. But for music, it is equally as effective.

Where Pro Tools is Still Leading the Industry

So while many of us (including myself) find it humorous that FTRT bouncing is such a big deal with PT 11. Let’s remind ourselves of some ESSENTIAL DAW features that only Pro Tools has that other DAW’s have not yet caught up with.

1. A Seamless Autosave. Logic, Sonar and all other DAW’s I have ever used have the most horrific AutoSave (or no Autosave). I can’t tell you how many hours I have lost in other DAW’s due to a crash after hours of work.  In Pro Tools, the worse case scenario will be that you have lost 5 minutes of work.

2. VCA’s! I don’t know how anybody mixes without VCA’s. Check out my YouTube Video on VCA’s HERE.

3. The ability to disable a VI and unload the Memory. Okay, this one is really just a stab at Logic. I can’t believe that when you freeze a track in Logic 9, you still keep all of the memory of that instrument loaded. It only unloads the CPU! (Crazy!!!)

4. Proper stereo panning versus balancing. Only Pro Tools has this as far as I’m aware. All other DAW’s require a plug-in to do this.

5. Extremely in depth “Grouping” including the ability to have groups that link only insert A’s, or Send D’s and other very specific group parameters.

6. Sophisticated Automation. It appears to me that almost all DAW’s end their Automation after they have created Write, Latch, Write, Touch modes. Pro Tools Automation is far, far deeper than some simple automation modes. (HD specific features specifically)

7.  Many other features that I’ll focus on another time.

Pro Tools 11 Features that are New to the Industry 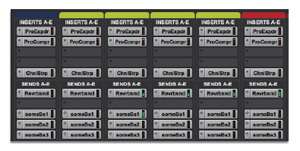 Now let’s mention some new Pro Tools 11 features that are going to be innovative to the audio industry.

Or the new Matrix that allows you to see all of your sends across your channels at once. Plus metering like K-12, BBC, VU, RMS and etc. I truly believe that this feature will improve the sound of mixes for people more than any plug-in or mixing technique as it will create awareness like no other DAW currently can to help you see your trouble areas. 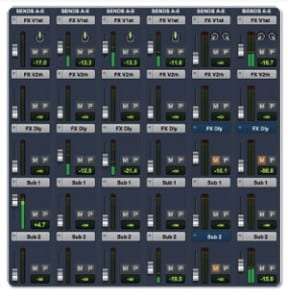 Okay, so I’ll admit that Pro Tools does not have as many bells and whistles as many other DAW’s, but I definitely think Pro Tools puts their development on the things that count most. I would rather have a rewritten more efficient Audio Engine any day over a bunch of gimmicky features. From my experience, Pro Tools has been far more stable and faster than any of the other DAW’s I have used because they focus on areas that really count and matter most.

Since Pro Tools 8, MIDI rocks! – Okay, many of you will think I am going too far with this one, but I would be willing to challenge anyone on midi composing vs any DAW with MIDI editing. I know many may say they prefer Logic, but I have yet to see the strength in Logic’s MIDI editing (but I’d love to be enlightened). I do TONS of MIDI work in Pro Tools and I feel like i can fly in MIDI land on Pro Tools. I couldn’t in PT 7.4.

The biggest weakness in VI land has been the lack of 64 bit which I do really hope that PT 11 will fix once and for all. Otherwise, I will continue to bridge that gap with Vienna Ensemble 5.

Okay, so now that I have opened up a huge DAW bashing post. Let me state my main point.

Pro Tools is not as old fashioned as you think it is! Every DAW is ahead on some things and behind on others. While some of these features Pro Tools is finally getting is 15 years over due, they are still far ahead of other DAW’s in many other areas.

I agree that Pro Tools is priced high and this new transition to PT11 is expensive to most of us HD folks. To some, an inferior DAW for $199 (DAW to remain unnamed :-)) is worth the savings. But for many of us, the stability, sensical features, compatibility and speed of Pro Tools is worth the additional cost.